Handel in the Theatre is a professional opera company established in Canberra by countertenor Tobias Cole, “one of the great treasures of artistic life in Canberra” (Limelight).

In 2017 we presented our second production, Esther:

“… a wonderful opportunity to hear Handel’s score beautifully played and sung. That it was staged so well by Tobias Cole was an added bonus.” – Canberra Critics Circle

“… resonates after the curtain has come down, ensuring that the music of Handel is heard, energetically discussed and enjoyed” – The Canberra Times

“SHOULD an Oratorio written 300 years ago be performed today? If you love well-crafted productions and superbly sung performances, the answer is yes.” – City News

Our company creates opportunities for Canberra artists to develop their practice in baroque music and perform at a professional level in our own community. We develop singers through our professional Dramatic Chorus, which rehearses over three months with our Artistic Director Tobias Cole, Director Caroline Stacey and Choreographer Belynda Buck. We also develop musicians through our orchestra, comprising mostly local players, under the leadership of Bianca Porcheddu (Canberra’s own Australian Brandenburg Orchestra violinist) and conductor Brett Weymark.

Our philosophy also emphasises community involvement. Our Balcony Chorus enables more singers to be involved, with just three weeks of rehearsals preparing them to add a powerful musical highlight to the show. We will also hold three open rehearsals of the Dramatic Chorus in the National Portrait Gallery, giving Canberra music-lovers the chance to observe the rehearsal process and get to know the music.

All funds raised will go towards the professional fees and rehearsal costs for the Dramatic Chorus and the Orchestra. As a result, your donation will not only help to create a powerful baroque opera experience for audiences; you’ll also be developing the pool of Canberra musicians with high level experience in this art form. Your support may even help some of our artists to further their careers in the current revival of baroque opera! 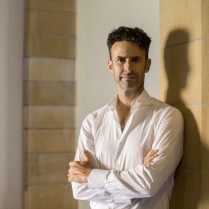 Tobias Cole is passionate about the music of George Frideric Handel. An award-winning opera singer and conductor, his long-term ambition is to stage all of Handel’s English works in Australia.

Tobias began to realise this dream as Artistic Director of the Canberra Choral Society, presenting ‘Saul’ (2012), ‘Theodora’ (2013), ‘Alexander Balus’ (2014) and ‘Hercules’ (2015) – all to audience and critical acclaim. In 2016 he launched his own professional opera company, Handel in the Theatre, debuting with ‘The Vow’ (based on Handel’s Jephtha).

Tobias is drawn to Handel’s genius as a composer, storyteller and opera producer, and collaborates with musicians who share this appreciation. Together they are committed to engaging modern audiences in the drama of Handel’s English works, without comprising the integrity of the music.

As a countertenor, Tobias won a Green Room award for his performance in Handel’s ‘Xerxes’ in 2009. He has performed throughout Australia, New Zealand, the UK and USA including title roles with Opera Australia, State Opera of South Australia, New Zealand Opera and Victorian Opera; in all the major Australian music festivals; with the Melbourne, Queensland and WA Symphony Orchestras; and been a guest member of the Song Company for many years.

Krysia and David Kitch and Riggs

Recovery. Renewal. Revolution. In 2021, The Cooperative presents a season of five operas, which explore and challenge the world around us. All entry is pay-as-you-feel, and all profits go to charity.