Guluu (or Australian Magpie in the First Nations Gamilaroi language from Northern NSW) is one of Australia’s most well-known songbirds with an array of complex vocalisations. This piece is based on some of those patterns and includes real original field recordings of the Wild Australian Magpie from Wild Ambience.

“According to the Mandalbingu people, a long time ago the sky was very close to the Earth and it was dark. Everyone had to crawl about the earth in darkness. The intelligent magpies decided that if they worked together they could raise the sky upwards to create more room for all. They did this by lifting the sky upwards by using long sticks. As they pushed the sky even higher it suddenly split open to usher in the first sunrise. The blanket of darkness broke up into fragments and drifted away as clouds. The magpies burst into song and from that time onwards they have greeted the sunrise with their warbling song.”
(Ragbir Bhathal, Aboriginal Astronomy)

This project is important to me because I love Australian nature and want to make Australian music about Australia more present and prominent in the Australian and the worldwide music scene. It is also about making music by women composers, performed by women musicians, supported by women sponsors, achieve a high profile on the global stage.

Funds will be used to support: 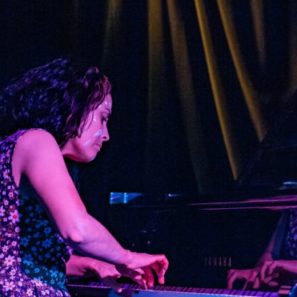 ​”Keyna Wilkins is a restless artist. An adventurous soloist, equally brilliant as a pianist and flutist” AUSTRALIAN JAZZ

​Keyna Wilkins is a pioneering Australian/British composer-musician. She was one of three finalists in the Australian nation-wide APRA/AMCOS Art Music Awards for Individual Excellence 2018. Her compositions are performed internationally and published by Wirripang. An innovative solo artist and leader of cutting-edge chamber groups, her music is characterized by a fascination with astronomy, First Nations culture, jazz, dance forms and intuitive improvisation. ​

Wilkins is an Associate Artist with the Australian Music Centre and has five tunes in the Australian Jazz Realbook. She also writes music for films and theatre including short film “Remote Access” which won Best Short Film at the Imagine This International Film Festival in New York 2019 and her composition New Galaxy has been recorded and broadcast by the ABC.