Is there evidence inside Dorothy McKeller’s poem ‘My Country’ that could undermine climate concern?

As our former Prime Minister Tony Abbott once said, Australia is a land of ‘droughts and flooding rains’. But is this famous line from a poem written in 1908 really proof that devastating droughts and extreme weather events are par for the course in Australia?

Is it really sustainable just to love our sunburnt country? Or will this kind of romanticism in the face of environmental catastrophe only lead to ruin?

After a bit of rain, our protagonist Luke thinks the drought is breaking. So he doesn’t de-stock as planned, but instead get’s his herd ready to calve in the spring. His family are the lucky ones, they’re on good country and it doesn’t need much. She’ll be right. It’ll rain.

“She pays us back threefold..”

Luke’s mantra rolls around on the tip of his tongue throughout the film. A line from the Dorothy Mackeller poem ‘My Country’. His boundary contains some of the best grazing in Australia. If he gets up early, works hard and digs in, he’ll be rewarded. Nature will provide. It’s always been that way. But, the rain doesn’t come. Luke’s wife Emma fears the ever-resilient mindset of farmers, and in particular her husband could be their undoing.

When their daughter ‘Pup’ learns a creation story at school about Australia’s first farmers being provided for by a land of abundance, Luke is forced to wonder what’s happened to the good country inside his fence.

This film has been in production for over 12 months already. Since August 2018 our team have been travelling out to Narrabri with a minimal cast and crew to place our scripted scenes in amongst the changing landscape. Throughout the finished film the audience will feel the drought change the location from green to yellow to a mars like dust bowl. The extended production period also allowed us to listen and fold in real stories from people affected by the worst drought in Australia’s history.

The next stage of this film will be to shoot the bigger dialogue scenes that glue the powerful imagery already captured together. In order to complete the project we need to double our crew size to include sound recordists, lighting technicians and extra camera crew. This bigger production means we need to raise money for the travel and accommodation of crew, cover the logistics of equipment transit to Narrabri and pay permits/insurance. We also hope this fundraiser will help pay for a composer and musicians to record a powerful score to take our film to the next level.

The film is Co-Produced by Eddy Bell and Steven Rees. 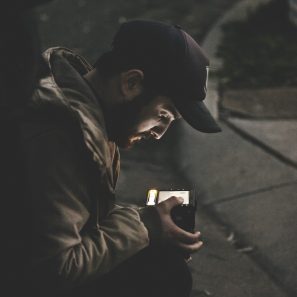 Eddy Bell first gained attention as a junior yee-haw on the NSW North Coast Rodeo Bull Riding circuit. When the bulls eventually outgrew him, he re-skilled and at the age of seventeen attained his Certificate IV in Circus (Foundation). This paved the way for successful stints as a Jumping Castle attendant, Karaoke host and Sumo Wrestling referee. Eddy finally found his way onto a film set in 2003.

Since then, he has worked in almost every film department, graduated (Valedictorian) from the Victorian College of the Arts, hosted Belgian TV and in his commercial directing career to date, has worked for major brands including Toyota, Volkswagen, KFC, eHarmony, OPSM, The Australian Government and The Australian Air Force.

Eddy’s short films have also been awarded top prizes at Sydney Film Festival, Melbourne International Film Festival, St Kilda Film Festival and Flickerfest. He’s won an Australian Directors Guild award, was nominated for the 2014 AACTAs and was also recognised at the Cannes Lions International Festival of Creativity with a Gold at the Young Director Awards.

Eddy has a passion for storytelling and a knack for getting authentic performances out of anyone or anything he puts in front of the camera.