Flying Penguin Productions is a critically acclaimed and multi award winning SA theatre company that enjoys a reputation as one of the state’s most significant and sustained independent companies.

Sea Wall is a breathtaking modern tragedy about the sudden death of a child and a father’s impossible task of confronting and understanding this cataclysmic event. Sea Wall, like all great tragedies, is contemporary and urgent, not because it explores zeitgeist issues of the day but rather because of its exploration of eternal themes.

David Mamet’s Pulitzer Prize winning play Glengarry Glen Ross, enjoys an unrivalled critical pedigree, an urgent thematic concern (the death and illusory nature of capitalism) and is rightly regarded as one of the great ensemble works ever written for the stage – an actors’ loved favourite.

The program of activities promises to provide South Australian artists and audiences with an important opportunity to engage with two unique leading theatre works from the International repertoire.

The Company has drawn together a stellar team of artists to bring these works to the stage. Your donation will assist in providing this outstanding team with the resources needed to make and present engaging, challenging and memorable theatre. 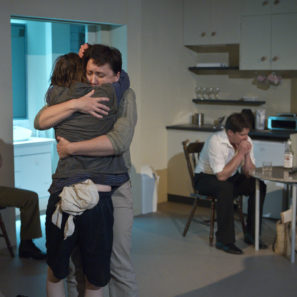 Formed by Artistic Director David Mealor in 2005, Flying Penguin Productions was created to forge new opportunities for the leading actors of SA, seeing their ongoing development as crucial to the future of the art form. Flying Penguin is dedicated to producing unforgettable theatre experiences that provoke and engage and are always underpinned by acting of the highest calibre.

The Company has presented multi award winning, critically acclaimed seasons of Translations by Brian Friel, The Birthday Party by Harold Pinter, Assassins by Stephen Sondheim and John Weidman, True West by Sam Shepard, Blackbird by David Harrower, The Dark Room by Angela Betzien, The Juliet Letters by Elvis Costello and The Brodsky Quartet and SOLO – a Double Bill: Bitch Boxer by Charlotte Josephine and Sea Wall by Simon Stephens.

Flying Penguin has generated a national profile and enjoys a reputation as one of SA’s most significant and sustained independent theatre companies. It has earned critical acclaim for its works and been nominated for 29 awards, winning 17 of these. The Company has presented work with State Theatre SA, Malthouse, Adelaide Festival Centre, Adelaide Cabaret Festival, Adelaide Fringe and Holden Street Theatres.