She Said Theatre is an independent theatre company based in Melbourne, Victoria. We create new Australian works that prioritise women and other under-represented artists both on- and off-stage. Our award-winning works have been seen by audiences across Australia and New Zealand, and critically praised for their amplification of unheard voices in our society.

This August, we will present the Victorian premiere of Fallen, created by She Said Theatre’s Seanna van Helten (writer) and Penny Harpham (director), at one of Melbourne’s leading independent theatre venues, fortyfivedownstairs.

Fallen is inspired by the history of a real home for “fallen” women in 1840s London founded by Charles Dickens. Julia, Martha, Isabella, Georgie, and Rosina are destitute, desperate, and have been promised a clean slate on the other side of the world, in the new colonies of Australia. Under the watchful eye of Matron, they cook, they clean, they sing, and sew, as they wait for their new lives to begin.

But as the date of departure draws near, the six women begin to wonder what reinvention will cost them. What will such promises make them do?

In a year in which women across the arts and entertainment industries (and many others) have broken the silence on the inequalities they face, Fallen is a landmark project that we believe will move and transform its audiences.

Following developments with Playwriting Australia, Women in Theatre & Screen (WITS), and a co-production in Sydney with Sport for Jove Theatre Company, we are thrilled to partner with fortyfivedownstairs to present Fallen in our home state of Victoria. Staged in a 19th-century building in the heart of the CBD, we will reimagine Fallen as a site-specific, intimate, and highly experiential theatre work that illuminates a forgotten story in the history of Australia.

She Said Theatre provides safe, artistically invigorating spaces for women theatre-makers – but we need to do more than this to ensure our ongoing success.

However, rather than rely on our cast and creatives to do this project out of love, we need to pay them fair fees – and we want your help to do it. Your support will go directly towards the fees of all artists involved on Fallen – giving them the economic agency to create this story about women who have none.

Thanks to Creative Partnerships Australia and MATCH Lab, the first $7,000 we receive will be matched dollar-for-dollar – doubling the value of your donation. Plus, all donations over $2 are tax deductible. Our partner Auspicious Arts Projects will help us manage our budget, payroll, tax, and insurance compliance, and ensure all funds are acquitted and accounted for. 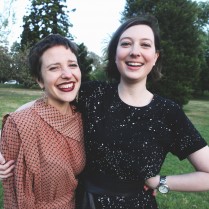 She Said Theatre is an award-winning independent theatre company creating new Australian works that prioritises women and other under-represented artists, both on- and off-stage.

Founded by co-Artistic Directors Penny Harpham and Seanna van Helten, we use performance to explore alternative histories, re-imagine forgotten stories, and encourage a theatrical dialogue with the unheard voices in Australian society.

“[Fallen] is a work that should be granted… the chance to advance to bigger stages and audiences. Few works on major Australian stages are asking audiences to consider women on their own terms, in their own words.” — Time Out Sydney

“As a theatre company on a mission to amplify women’s voices in their work and in Australia’s theatre industry, She Said Theatre are proving themselves a force to be reckoned with.” —Time Out Melbourne

Double the value of your donation! Thanks to Creative Partnerships Australia’s MATCH Lab program, every dollar you preference to this campaign will be matched dollar for dollar, up to $7000.