The Web Series is set in Brisbane, Australia and follows Rohan, an Indian immigrant who finds an unlikely housemate in the youthful larrikin Patrick. However, challenges begin to arise as the vast gap between their beliefs and perceptions of one another come to the surface, showing how two different people can fight over different opinions but at the same time resolve their issues by coming out of their comfort zone.
Meanwhile, Rohan meets the bubbly Tilly through a chance, unexpected meeting at work. An immediate chemistry is formed – however, much like Rohan’s relationship with Patrick, external forces present an obstacle to a level of acceptance of their differences.

Different Worlds is an independent production with a diverse crew, ranging from university students to people seeking an entrance into the film industry. We are seeking funding via the Australian Cultural Fund to create a fleshed out and established series based on the Pilot episode.

Different Worlds is important, not just as entertainment, but as a mission statement on the value of overcoming one’s own biases. We hope to offer a unique insight into the lives of immigrants living in Australia; how assimilating into a foreign culture can be strenuous, and how those who identify as Australian can co-exist with new Australians and Immigrants alike.
Different Worlds aims to bridge the gap between the international communities and cultures present in Australia, and Australian culture and people; to create a sense of unity and community that’s respectful and caring.

The target audience is people aged 18-55, ranging from Australians, Indians or citizens from other English-speaking nations, however the series can be a learning and entertainment for anyone.

We are hoping to have the first season completed by the end of 2021 should we secure funding.

Donations will be used to support shooting the first season (8 Episodes – each episode will be around 35-40 minute long – Pilot episode (40 min) already shot) of the series – this includes overheads, editing, sound mixing, colour grading, cast and crew fees, set design, catering for cast and crew, promotional material and marketing.

Here are the details of our Facebook page – “@DifferentWorldsWebseries” and Instagram page – “differentworlds2021”. These pages will keep you up to date with any news regarding the Different Worlds Web Series. 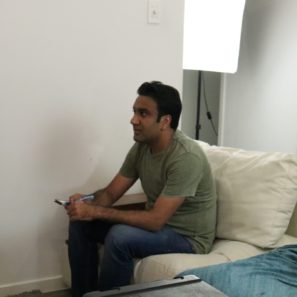 I have been doing theatre and films for more than four years and have acted in many plays/short films/film.

I have written my own script for web series “Different worlds” which received positive reviews from Screen Queensland Australia. The web series’ intent is to bridge the cultural gaps. I have shot a pilot episode of my web series which will be released soon. I have also acted in an Australian feature film – Greed – and some short movies like Frightened Rabbit, Murder at the Mudflats and plays like Welcome to O’ Malleys Bar, Sister Icarus, I love you etc.

I have done few acting courses in Sydney/Brisbane – Meisner technique, script analysis workshop and improvisation workshops. I am also an improviser and a part of the Impromafia group in Brisbane. I have also acted as a main lead in ad film project Best Belt by Griffith University students. I did acting course in India for more than a year from one of the renowned acting teacher who was passed out from National school of drama, New Delhi, India.