I’m Helen Thomson, and I am a Soprano in dire need of some depth.

Over 20 years, I have built a successful high-end classical music practice incorporating vocal performance, composition, musical direction, coaching, and management of projects, events, people, finances and grants. I am inventive as well as industrious; creative, and a process-head; adventurous, while also being quite averse to needless risk-taking. When I take on a challenge I like to know that I can rise to it.

Playing a bass instrument to a professional standard is a challenge I’ve been longing to rise to for some years; but this year two things happened to get me into action. First, I got accepted to the MATCH Lab program (more on that below); and second, I got a Beginner Scholarship to the 2017 Easter Viol School. So this will be the year that I start to realise that dream.

Between now and the end of September I will be raising funds for the acquisition of Tasmania’s first resident contrabass viol, or violone.

Why a violone? Three main reasons:
* it makes an extraordinarily beautiful sound. It combines the arresting depth of a double bass with a ringing resonance not unlike the human voice. Having this instrument will allow me to make magnificent musical things happen, not only in the Early Music field, but also in a myriad of other innovative projects and practices.

* a Violone will make me more employable, rounding out my practice and range with the mastery of an instrument, which in turn will, in the medium term, open up opportunities for me to play in Tasmania, interstate and possibly even overseas. Even if the Tasmanian instrument never travels outside Tasmania for performances, there’s every chance that I will – increasing my versatility as a musician both locally and further afield.

* a Tasmanian Violone will also be incredibly useful for the burgeoning Tasmanian professional Early Music scene, avoiding the risk and hassle of flying a huge instrument in from the mainland.

As part of the MATCH Lab program, Creative Partnerships Australia has agreed to double every dollar I raise for this project. This represents a unique window of opportunity for your contribution to make a double impact!

All funds raised by this ACF campaign will be used to acquire a high quality, imported violone, expertly set up by Hobart-based luthier and Churchill Fellow, Adam Edwards, including modifications to bridge and soundpost, to ensure that the instrument operates to its peak capacity,

Once the instrument is complete and delivered, I will immediately transfer my practice from the Viola da Gamba I am currently playing, to the new instrument, and begin building my skills, with a view to beginning to perform publicly in early 2018.

For more information on my practice more broadly, please feel free to visit my website (qvocal.com) or Facebook page (facebook.com/qvocal). 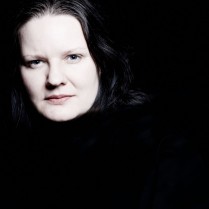 Helen Thomson started young in contemporary classical music, with a solo debut at ten years of age in Donald Hollier’s contemporary opera, In Dulci Jubilo, and her first publicly performed piece, “who am” premiering when Helen was 14.

On completion of her Master of Music at the University of Melbourne under Merlyn Quaife and Stephen Grant, Helen moved to the Netherlands to pursue her career as a classical soprano. She performed with Amsterdam Baroque Orchestra and Choir, the Netherlands Bach Society, the Egidius College and the Netherlands Radio Choir.

Since returning to Australia, Helen has worked full-time as a performer, composer, arranger, musical director and recording artist, in projects ranging from broadcasts on ABC FM and Compass; In Australian and world premieres of contemporary classical music (Rutti Requiem 2012 Middenway’s Sun of Umbria 2013). Helen also directs Swansong and QTas choirs, and was one of several contributing composers to the 2014 “Queer Narratives: Story to Song” project.

Thanks to Creative Partnerships Australia’s MATCH Lab program, every dollar you preference to this campaign will be matched dollar for dollar, provided I reach my campaign target of $2,500.