A suburban netball team. A new player. Cass says she wants to fit in but if she won’t play by their rules why does she bother coming at all? She claims to see something they cannot, a warning of sorts. All the other women want to do is play. But this player will push each of them to a point of furious revelation. Nothing will be left on the court once these women are done with their reckoning.

A sweaty play about the petty and the profound, the mundane and the mythic, Contest asks how we might be with each other if we don’t have to win.

Hi, I’m Emilie Collyer and my play Contest is two weeks away from its world premiere. This work has been 3 years in the making and it’s quite incredible to be at this moment of building the production and bringing it to audiences. I have gathered an incredible team around me to build this work. It’s a big piece with a big vision. And the challenge to our design team is particularly bold. How to transform the beautiful Main Hall space at Northcote Town Hall into an epic, poetic netball-scape? The brilliant designers have seized the challenge with gusto and I can’t wait for audiences to see all the pieces of this huge work come together.

As always with independent theatre, we are creating the work with a very tight budget. We have been fortunate to get some great support from the Australia Council for the Arts, Besen Foundation and Darebin Arts. However, the cost of bringing together a creative team of 14 people over 5 weeks, plus a design & production budget, is immense.

We are aiming to raise some funds in a short, sharp fundraising campaign, to extend our production design and realise our full vision for the work.

If you are able to donate any amount – however small – it would make the world of difference to us and to the production.

You can also support us through sharing word of the production with your friends, and booking a ticket at: darebinarts.com.au/whats-on/contest-written-by-emilie-collyer/

Emilie Collyer is a Melbourne-based playwright, poet and author. Through her writing, she explores the human condition and the world around us with biting humour. She is an artist with a unique vision, a striking voice, and an incredible ability to engage her audiences with beautifully crafted speculative and surreal stories.

Emilie has twice won the Cross Genre Prize in the Scarlet Stiletto Crime Writing Awards (2012 & 2013) and also won Second Prize overall in 2012. She has two short story collections published with Clan Destine Press and her stories, poetry and essays have been published in numerous anthologies and journals both in Australia and overseas.

Emilie is delighted to have the opportunity to present her next project via the Australian Cultural Fund. 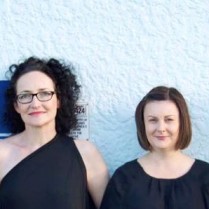