Compose Queer is an initiative to empower young queer composers. We will source four composers and provide them with a paid opportunity to compose for Divisi Chamber Singers and Sally Whitwell. At the heart of this project are the composers themselves. We want to give them the opportunity to write a new piece in a professional context, working with one of Australia’s leading musicians and a live ensemble. The concert and workshops will take place over a weekend in the middle of 2020 with composers selected by January 1st.

Although there is a thriving amateur queer music scene of community organizations and hobby musicians, there is limited opportunity for composers to express their queerness at a professional level. With this in mind, our project has two goals. Firstly, to do just that, empower four composers with an opportunity to be as queer as they desire and express it without the restrictions that come with amateur performers. Secondly, raise awareness of queer issues in classical music to the broader community. If we want this to be a professional standard project Divisi needs to pay these composers in a meaningful way for the professional standard work they give us.

To achieve this we need to provide a $600 fee to each of the four composers and organise comprehensive workshops for their music. This will culminate in a concert at the Ian Potter Southbank Centre’s Hanson Dyer Hall. From this campaign, we need to raise $6000. This will pay for Sally Whitwell’s time and all other associated expenses. All remaining funds and proceeds will go towards the charity Minus 18, a youth-driven network for the LGBTIQ+ community. This will be an invaluable career building experience for these young artists and will contribute four new works to Australia’s music scene.

You can find out more about Divisi and our current projects at www.divisichamber.com or www.facebook.com\divisichamber. We will use the website and our mailing list to keep you updated about the progress of the project and to announce the winning composers! 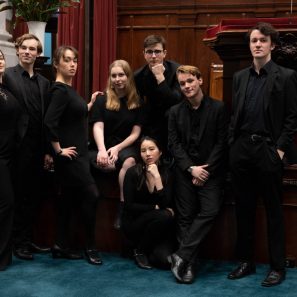 Divisi is a volunteer consort specialising in unaccompanied choral music. As a group of developing professionals, Divisi‘s primary aim is to enhance the proficiency of its members and artistic staff – musical and otherwise – through the performance and preparation of ensemble vocal music

The group began as the passion project of its founders: Alex Gorbatov and Bailey Montgomerie. They sought to perform choral music to a higher standard than they ever could through their University. After realizing the immense value the group was giving to them as musicians, the group transformed into a project based choir with community focused aims of performing and commissioning Australian music and the continued professional development of all involved.

Divisi is about to announce an exciting 2020 season which includes it’s first attempt at an extended ensemble work with Fauré’s Requiem but, even more exciting, hopes to commission four young Australian composers and give them the opportunity to work with one of Australia top all-round musicians, Sally Whitwell. Our hope is to start a tradition of commissioning new works so that a season does not go by without a new commission or a premiere.