After a successful premiere iteration last year, the Brisbane Music Festival is returning in 2019. An ambitious ten-performance program has been constructed around the theme of this year’s festival, ‘Journeys’.

The festival this year features some of Australia’s most vibrant arts practitioners. Highlights include Sara Macliver in recital and the premiere season of bloodpaths, a collaborative project featuring new music and contemporary dance.

The BMF is interested in narratives. It is interested in building bridges between performers, composers and listeners. This is a festival engaged with a cultural dialogue that celebrates the masterworks of the past, while also engaging in contemporary content with 28 newly commissioned works receiving their premiere performances.

An oft-praised facet of chamber music and solo instrumental performance is its potential for heightened intimacy between artist and audience. Seeking to explore this connectivity, the BMF takes place in multiple unique settings throughout the city of Brisbane.

Following on from the success of the premiere iteration of the Brisbane Music Festival in 2018, Artistic Director Alex Raineri has devised an ambitious and much-expanded program for the 2019 second outing of the BMF.

Complementing generous funding from the Australia Council of the Arts, the BMF is seeking to fundraise a further $20,000 to hit our target budget for 2019. Any contribution regardless of the size is greatly appreciated and donors will be acknowledged in all printed programs and wherever appropriate on online platforms.

The BMF team firmly believes that our festival has the capacity to provide a significant ongoing cultural offering to the city of Brisbane (and Australia at large) by way of providing engaging and innovative music performance and being a platform for commissioning and presenting new Australian music, or productions that are produced collaboratively across various art-forms such as theatre and dance.

Full details of the festival program, artists, commissioned new works, and events can be found at www.brismusicfestival.com or on our social media platforms (Facebook and Instagram). If you find yourself desirous of more information, please write to us at brisbanemusicfestival@gmail.com

Kicking off on November 22nd, we are full steam ahead both creatively and logistically in our preparations for this years festival. The Brisbane Music Festival team looks forward to hopefully seeing you at some of our events and humbly hope that you might support our project both now, and into the future. 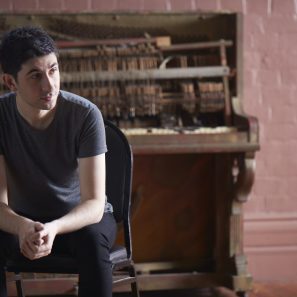 Described by Limelight Magazine as “a soloist of superb virtuosic skill and musicality”, Australian pianist Alex Raineri is an active recitalist, concerto soloist and chamber musician.

Celebrating the bonds between us. This contemporary dance project for children and their parents, grandparents or carers lets kids take the creative lead.