The Story
Owen and Alice Hargreaves never forget they are married, but sometimes forget they are in love. Routine and responsibility, stalled careers and school fees, zumba and missionary sex have slowly beaten them into a caged submission and they are now both on the edge. In the wake of a neighbourhood tragedy Owen hits the road for what should be a routine work trip, leaving Alice at home to deal with the aftermath of what took place and the strangers who have moved in next door. Catapulted out of each others orbit and into a world of hedonism and depravity, the couple are forced to confront the other and face the realisation that, outside the cage, what seemed like freedom may be their demise. Breeding In Captivity is a film that challenges the traditional ideals of romantic relationships by questioning what it is that we really want.

The Background
Breeding in Captivity is a feature length film that completed principle photography in December 2012. The film is in its final edit and requires funds to complete the sound mix, sound track and special effects. Once released this film will be the first wholly produced Tasmanian feature film to be screened in Australian Cinemas since 1998’s The Sound of One Hand Clapping.

The script was written collaboratively. First the actors developed their characters and then improvised scenes together. These improvisations were filmed and from the 100 hours of footage a script – so real that people cried when they read it- was written. The story captures the essence of loneliness, passion, disconnection and love in contemporary marriage. But more than that it is a story that shows our need to evolve from relationships built on duty and responsibility to one’s based on mutual growth and support.

During the shoot I remember walking down a street in Hobart and feeling a sense that Hobart and my imagination had became one. And in that oneness I finally accepted the end of my marriage – an end that had been the personal provocation and inspiration behind the film. But for others who have been involved in the creation of this film it has meant something else. From simply being a place where careers started, to being a place where love was found; or ended, or babies were born, or parents died, or friendships formed or crushed.

For everyone the film is a place where people have had to face their beauty and their ugliness. Like Tasmania, it has been a place of revelation. This sense of revelation is what we want to share with the world.

This is a story and film that has touched so many, so deeply, already – and it hasn’t even been released yet. You can help this film find an audience. You can help bring this amazing energy, this amazing film to the rest of the world. You can part of something truly beautiful.

An Indie Film or a Village

When we set out to make this Tasmanian Feature Film the entire community got behind us. When you look at the amount of people involved it reads more like a village than a film set. In fact;

89 Businesses and Individuals sponsored this film with, wither cash or in-kind support. The sets, the costumes, the cars we used, the locations, the food we ate, the equipment used to film, everything was loaned or provided at a heavily discounted rate. Without local businesses this film would not have been possible.

62 Crew members  deferred their payments in the development and production of the film; and

181 Actors and Extras deferred their payments to be in the film.

That is, an incredible 379 businesses and individuals involved in a feature film with a shooting cash budget of less than $70,000. It is amazing to think that we were able to feed that many people in the 5 weeks that we shot, let alone pay for all the equipment, flights, accommodation, petrol etc. We think that the support we received is phenomenal and so we are going to start highlighting and celebrating the myriad of people and business who have supported us. Today I’d like you to visit our sponsor page and consider, next time you need furniture, clothing, accommodation, a meal, camera equipment. a good read, belts, jewellery, antiques, sound equipment or anything else you can imagine that you have a look at the supporters of this film and give them some of your business and help promote and grow Tasmanian business and industry.

So, we need a little more money to finish this film and show the work and generosity of the almost 400 people who made it. Please help us finish the editing of the film by donating some money via the Australian Cultural Fund and receiving in return a tax deduction and a credit on the film. 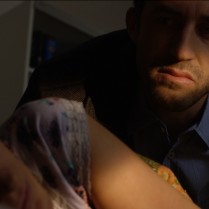 Lucien Simon founded ScapeTheatre in 2000 and then became Artistic Director of Riverland Youth Theatre in 2002. Since 2006 Lucien has worked as a freelance filmmaker and community artist building an impressive portfolio of projects.

Lucien is Director/Co-Writer & Co-Producer of the feature-length film BREEDING IN CAPTIVITY (currently in Post-Production). He has directed four short films, including STRIPPED BARE the winner of the Open National award at the 2010 Canberra Short Film Festival and the documentary CONVERSATIONS IN KINGBOROUGH (winner of a 2010 National Local Government Award).

As a scriptwriter Lucien has three feature films with Screen Tasmania investment in development. Two of them were developed through international Script Development Company Arista.

In 2013 Lucien ran workshops on the Character Development Process he developed for BREEDING IN CAPTIVITY in Malta and at Berlin’s Movie Miento Festival.

In 2014 Lucien was Artist in resident in New York working at the Pratt Institute with Art Therapist Brianna MacWilliam to develop his character development process further.

In 2015 he created the Transistor Youth Theatre Pilot Program and in 2016 Transistor Youth Arts received funding from Clarence Council to create a web series with Rokeby High School and Rosny College.