The festival in Launceston and Hobart (10-19 May, 2019) attracts educated film lovers from Tasmania and Australia.

The films entertain, challenge and inspire with stories, ideas and conversations on themes from Stories of Us, World Stories, Star Studded, Strong Women, the Call of the Wild, World of Change, Eat/Drink/Live, Nearest Neighbour:Indonesia and more. Four classic films screen in quirky settings with drinks.

It’s fun with red-carpet screenings and after party every night including the 40th anniversary of My Brilliant Career. Inspiring Action Sessions, such as a forum of strong women from film and locally, focus on the films and themes of the festival. We exhibit Art and Photo on film themes and a Day on the Kingsway festival offers locavore food, Tasmanian wines/beers, music, maypole dancing and kids fun activities. Fun for all!

Tasmania was the only state in Australia not to have an official state film festival until the Breath of Fresh Air Film Festival was started in 2010 by Launceston couple, Helen and Owen Tilbury. It has grown 7-fold since its beginning and is now described by a leading film maker Martin Simpson as: “Having attended many international film festivals, I suggest that BOFA is one of the best small film festivals in the world, curated by the most friendly and efficient hosts on the planet and with fine food and wine at every turn.”

But the festival needs support: We are screening more films, expanding to Hobart and running pop-up screenings to build our audience, and further developing the Day on the Kingsway mini festival, but government funds have shrunk by $75,000 whilst only 5% of box office sales are left after venue/film hire and GST. To address this we’ve found some generous corporate partners but we still need help from individual Patrons for the remaining shortfall of $20,000.

Donations will support the costs of:
1. promoting the festival state-wide and nationally through printing and distributing 20,000 40-page print programmes and paid social media and other advertising.
2. bringing directors and actors to the festival to talk about their films at screenings, to celebrate significant milestones like the 40th anniversary of My Brilliant Career, to be part of Action Sessions on the themes and to give masterclasses with local film-makers.
3. running an art and photo competition on the theme of favourite films and their influence.

A successful 2019 festival will grow the audience 50% to 9,000+ and to 10,000+ in 2020, at which point the state and local government funders will review their level of support. These audience numbers will provide a powerful reason for the film festival to have its government grants increased. The increased attendance of inter-state and intra-state attendance will also bring an economic benefit to Launceston and Hobart. 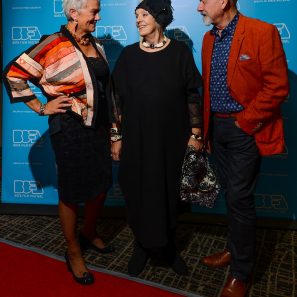 The Tasmanian Breath of Fresh Air (BOFA) Film Festival brings great stories and people together. We’ve searched the world for stories that intrigue, inspire and invite conversation. BOFA runs for three days in Hobart (10-12 May, 2019) and over four days in Launceston (16-19 May, 2019).

BOFA is about ideas and change, about personal challenge, about community and about having fun.

With diminishing government funds and an expanding festival we need Patrons to support film categories that they are passionate about:
STAR STUDDED – Showcasing award winning films and stars of the screen.
STORIES OF US – The best of Tasmanian and Australian films telling the stories of us
WORLD STORIES – Outstanding stories from the world’s best film festivals.
STRONG WOMEN – Inspiring stories of strong women in film and in life.
NEAREST NEIGHBOUR – Indonesia, 0ur nearest neighbour can be a bit of a mystery but these stories will intrigue, &inform.
EAT/DRINK/LIVE – From the fine food/wine centres of the world to sustainable living in Australia.
CHANGING WORLD – Docos and features that take a deeper look at the way our world is changing around us.
CALL OF THE WILD – Stories of extreme adventures in the mountains, the sea and the air.

The Art of Friendship is a short documentary that will form part of an exhibition celebrating an unusual 20-year friendship between communities in two very different parts of the world.