Bach’s glorious music will be given a new dimension in this uniquely-conceived semi-staged performance. Due to Covid distancing requirements for both the audience and performers, the venue is now the spacious senior school auditorium at Kelvin Grove State College. Comprising two repeat performances, this production will give audiences an opportunity to be inspired and moved by this new interpretation, which has at its core the timeless music of J. S. Bach.

The project will feature a hand-picked orchestra of local Brisbane baroque musicians, and will showcase the talents of these wonderful soloists:

With no income from concert revenue in 2020 so far due to Covid cancellations, your donation will be utilised in supporting these local music professionals.

We’re excited to be preparing a production of this scale in the midst of the uncertainty which currently dogs the performing arts space. This will give Brisbane audiences something to look forward to in the lead-up to Christmas, and will enable us to provide some feeling of normality at that time of year, which would normally be brimming with concert-going opportunities. 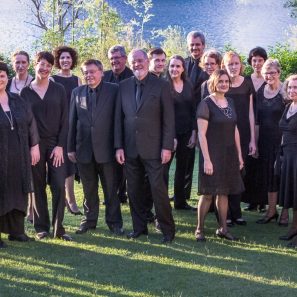 Devoted to presenting high-quality repertoire in a diverse range of styles, Canticum Chamber Choir enjoys a reputation as one of Brisbane’s finest choral ensembles. Under the leadership of founding Music Director Emily Cox since its inception in 1995, the choir has been honoured to collaborate with professional groups such as the Queensland Symphony Orchestra, the Queensland Ballet and the Queensland Youth Symphony Orchestra.

The group appeared in both seasons of “Brisbane Baroque”, has sung under the baton of renowned conductors Richard Gill, Benjamin Northey, Geoffrey Lancaster, Ottavio Dantone and Erin Helyard, and from October 2017 until February 2018 took part at regular intervals in GOMA’s “Gerhard Richter: The life of images” exhibition. Other highlights include its invitation to perform in Japan at the World Symposium on Choral Music in 2005, being part of the Queensland Conservatorium of Music’s Mahler 8th Symphony project in 2018, and performing in the Coff’s Harbour Music Society concert series in 2019. With an ever-expanding world of music to explore, Canticum strives to offer top-quality choral performances in Brisbane and further afield, providing audiences with inspiring and memorable musical experiences