What happens when our games are about war, and war is like a game?

Fifteen year old Arki sees the dead bodies of the players he kills in his games. His mother takes him to a psychiatrist, who thinks he has Post Traumatic Stress Disorder. So she seeks advice from Nelson, a major in the army. She also meets Aaron, Arki’s older doppelganger, a bonafide case of PTSD, just returned from Afghanistan to his young wife Lily. Lily takes Aaron to an Afghani restaurant run by Saif and Nadia. Both are recovering from living through the endless wars their country has been subject to. At the restaurant, Aaron gets drunk and angry, and steals an antique sword hanging on the wall. As each new character is introduced, the poisonous ripple effect of war is further revealed, and all of the characters struggle with the effects of war with varying degrees of  success. Surprising alliances are built across racial and generational lines, and the lessons learnt by people whose lives have been touched by war are given the credence they deserve.

Hi, I’m Melissa Reeves, and I am raising funds for the premiere production of my new work – ARCHIMEDES WAR. This play won the Griffin Award in 2016, and was presented at the CYBEC readings at the MTC, and at the Playwrights Festival, and now, at last, we are putting it on! We have secured over sixty percent of the funding we need to mount our show, through direct and in-kind support from the Darebin Speakeasy, and the Australia Council. We are looking to raise funds for the full sum of wages and creative fees, and for production expenses for the show.

ARCHIMEDES WAR was inspired by reading about the devastating effects of the Iraq and Afghanistan wars on combatants and civilians, but it also addresses what happens to us back home. There is a cultural centrality to stories, games and films about war that sits oddly with the fact that even as we were deeply involved in waging war overseas in Afghanistan, back here in Australia, we were curiously unaware, even uninterested in what was going on. Australia has many inhabitants who are struggling with the after effects of being involved in a War. Scores of people have fled here from the most horrendous wars, many of which Australia was instrumental in pursuing.

ARCHIMEDES WAR explores these ideas with an accessible, funny, style that enables it to touch on complex, and tragic aspects of our society with a lightness of touch that will appeal to a broad audience. The staging will be simple. A constant animation/video thread will act like subliminal wallpaper, but also take the main narrative thread at key points. We see online games, hallucinations, drone warfare footage, toy drone footage, and digital reconstructions of violent incidents in combat. The audience has privileged access into fifteen yeal old Arki’s unconscious through screens, dream-scapes and visions.

If you are able to donate any amount, however small, it would be a massive help to us, and to our production.

You can also support us through sharing word of the production with your friends, and booking a ticket at: ARCHIMEDES WAR by Melissa Reeves and Susie Dee 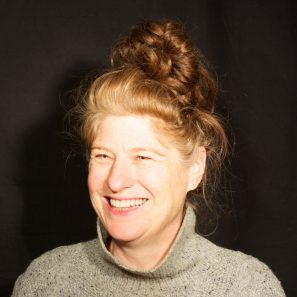 I have worked as a playwright for over thirty years and have written more than twenty plays. I have won four Premiers Awards and seven Awgies.

I wrote my first play IN CAHOOTS for The Red Shed, a small, independent theatre collective in Adelaide, and went on to write more plays for them, including SWEETOWN, winner of the South Australian Premiers Award. I also worked extensively with Melbourne Workers Theatre, a political theatre company committed to writing work for and about people whose stories were often ignored by mainstream companies. For MWT, I wrote ROAD MOVIE, a collaboration with Back to Back Theatre, and WHO’S AFRAID OF THE WORKING CLASS? and FEVER both co-written with Andrew Bovell, Patricia Cornelius, and Christos Tsolkias, with the composer Irine Vela.

In the latter part of my career, I have worked as a freelance playwright, writing many  plays including THE SPOOK and FURIOUS MATTRESS. I have had plays presented by a  great many Australian theatres, including Belvoir St., Melbourne Theatre Company, The Malthouse, Queensland Theatre Company, Perth Theatre Company, and La Boite,. My most recent work was another collaborative piece – ANTHEM, that premiered at the Melbourne Festival, directed by Susie Dee.

The second curated season of independent theatre in Adelaide’s most exciting new venue.