I have chosen to write and direct this piece for two key reasons.

The first being that I was raised by an optimistic rom-com-adoring mother, and a nihilistic sci-fi-loving father. This makes it impossible to find something that I can watch with both of them, let alone something that we can all enjoy.
The second reason is that I feel Australian content is currently quite limited. Australian society and culture is so vast and has so much potential for varied and unique stories, and yet there is a strange lack of such. Namely genre pieces, queer stories, female driven narratives, and stories that centre around the aforementioned things without being limited to existing as only that.

That’s what Apocalypse Post is about.
I aim to create this project as a welcome subversion of what audiences are expecting from its components.
The project is science fiction, but it trades out sleek surfaces and cold psychology for warm, hand crafted detail and an overriding faith in humanity and love.
The project is a romantic comedy, but it centres on two unconventional women and delves into a deeper more holistic understanding of relationships and trauma.
The project is about Australia in the apocalypse, but totally ignores the typical sun-scorched desert in favour of depicting an overgrown and near-surreal take on the Australian landscape.
The project is held together by the story of two queer women, but depicts this relationship outside of the usual genre of drama/tragedy, showing them in a spectrum of lights from comedic to threatening to sensitive.

This project is a proof of concept so our main aim is to distribute it into festivals that target uniquely Australian content, such as Sydney Film Festival, Sydney Underground Film Festival and the Australian Independent Film Festival before targeting other film festivals that will reach an international audience. We will use the hype from this when pitching for the long form project. The target audience for this proof of concept are people between 25-30 years old. This project, while being sci-fi, uses this to talk about some serious issues, such as loss, coping mechanisms and our dependency on non-renewable energy. 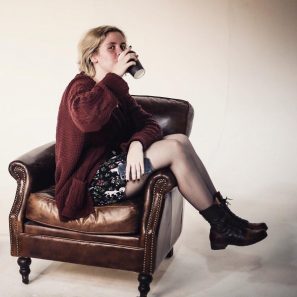 I am a Sydney based writer, director, and production designer, who aims to craft works with a focus on genre and stylisation, centering on female and queer stories.