A key event on the country’s cultural calendar, Antenna plays a vital role in developing audiences and connecting them directly with filmmakers, subjects and the documentary community, as well as fostering the next generation of documentary filmmakers.

Our 2019 Festival was our biggest and most successful to date. We had great plans for our 10th Anniversary Festival in 2020 – but then along came the corona virus. So, we set aside our big plans and refocused on what we can do, and how we can still provide audiences with the unique experience of sitting in a darkened cinema, sharing stories, and discussing them afterwards. And we created Antenna Selects: a year-round curated series of screenings and events that brings Antenna’s cutting-edge programming to Sydney audiences.

Antenna Selects is presented in partnership with AFTRS and starts on 3rd September 2020 at the Palace Chauvel Cinema. We have a strong line-up of films from all around the world, but to ensure the success of Antenna Selects, and to help us build our 2021 Festival, we need your advocacy and support.

Donations of $2 and over are tax-deductible. If you have any questions or are interested in a corporate partnership opportunity with Antenna, please contact antenna@antennafestival.org 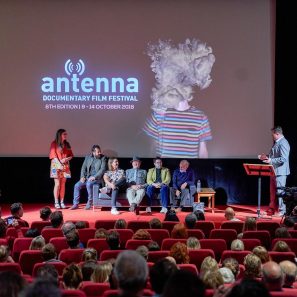 With an established reputation both nationally and internationally, the festival is celebrated as Australia’s best annual event to stay up-to-date with what is happening in documentary cinema today. Showcasing the most talked-about films on the circuit, Antenna is dedicated to programming independent and cutting-edge films that tread new ground in the documentary landscape. In addition to film screenings, the festival’s program includes talks masterclasses and industry-focused events, offering an independent and inspiring meeting place for documentary filmmakers, industry leaders and local audience.

The 9th Antenna Documentary Film Festival will be held between 17-27 October 2019.

Mad Bitches Inc. is a female cabaret show with a generous helping of wild performance poetry and cutting-edge theatre.