All my work has been a challenge to make due to funding. The seed of this short film was born at a particularly low point in my experience. When COVID 19 was declared, I went to do our shopping and realised that everything had gone – all that was left was empty shelves. I went home with a few groceries and an empty trolley. On my way, I saw the trolley collector collecting all the trolleys that had been used throughout the busy day. I just stayed there and spent the time in thought. What resulted is a simple story.

During the COVID 19 pandemic, people are frantically going about their business stocking up on toilet paper and other essentials, behaving much like ants gathering their stockpile. A key element amid all of this is the shopping trolley. It’s what enables all these people to gather what they need and bring it to their homes. An overlooked person in all this is the trolley collector. People seem to have forgotten that without this person, they wouldn’t have the ability to do what they need to do. A trolley collector gathers all the stray trolleys left in the abandoned places without a care in the world. He encounters a gruff old man who won’t give up his trolley to the collector. As the collector tries to track down the last of the trolleys, the old man sees the effort the collector has gone to, to do work for everyone else, and has change of heart. Even though he is homeless himself and needs his trolley, he decides to return the trolley with a little orange from his own stash as an offering.

COVID19 has had an impact on all creative small businesses as well as freelancers. The majority of artists have been out of work and trying to find a way to get back into the workforce. Some of the solo artists have developed their craft during this long break but some of them have no collaborative partners and spent their time at home in a less productive way.

Film is a collaborative art form – teamwork of many artists from different mediums coming together to deliver one production or creation. Writers, directors, actors, sound designers, art directors, music composers, editors, cinematographers and producers all collaborate during this creative process. We all come together to create a work of art.

Your donations will be a kick start to allow us to get back to work and make the film with professional production values; for us to make a cinematic statement. 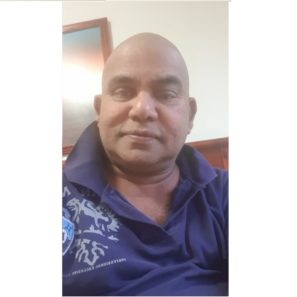 I am an emerging filmmaker who has studied filmmaking to develop my craft.

My career in the arts began as a child actor in Sri Lanka, with numerous roles in theatre. After completing High School, I was selected by the Sri Lanka T.V. Cooperation for three-year producer traineeship. I was granted three-month release to write and direct a successful commercial youth production of a musical drama.

Since arriving in Australia I have participated in many courses at AFTRS and Master Classes and with ASDA. I have developed many documentaries for both ABC and SBS broadcasters. Currently I am developing a feature film and a short film. I have not make a short film in Australia due to the lack of sufficient funds.

From Australia: An Accumulation

Recently there has been a much-needed re-evaluation of Australian history and the legacies of colonialism. One of the ways this can be addressed is through artwork and printmaking.