ALL WE HAVE IS TIME is a 20 minute science-fiction film that delves into the hidden corners of the human psyche, traverses the human condition and addresses the themes of time. memory and loss.

After surviving a malfunction in the depths of space, Williams and his crew begin to experience memories that aren’t their own. Haunted by the inaction of his past, Williams attempts to hold onto his disappearing memories while coming to terms with a temporal anomaly that will force them to question mankind’s very understanding of time. With the past, present and future no longer separate, Williams will risk everything in order to rewrite what was written in the past.

This will be writer/director Fraser Pemberton’s fifth film, each one growing with ambition and scope. Fraser is a Melbourne filmmaker who loves to explore distinctly Australian stories that retain fundamentally human concerns. His recent film, HOURGLASS, won Best International Student Short Film at the Glendale International Film Festival in 2018.

Like most of us in 2020, ALL WE HAVE IS TIME has spent most of the year in development. With a script and core crew in place, we need your help to hit the ground running in pre-production.

This is a highly ambitious logistical project with a large scope. Donations through the ACF will be vital in bringing our vision to life and will go towards the massive spaceship build that will take place in the state-of-the-art studio at VCA, as well as towards the huge amount of VFX that will be needed for those epic outer space visuals.

In a post isolation world, where we were both physically and emotionally disconnected, we hope that this film explores the universal concern of how we take time for granted, that anything can happen in the future to take it away, to live in the now and to act on your instincts and dream. If you’ve ever wanted to disrupt the notion of what a student film can be, or wanted to contribute to a grand set build with genre defining practical effects, then this is the project for you. 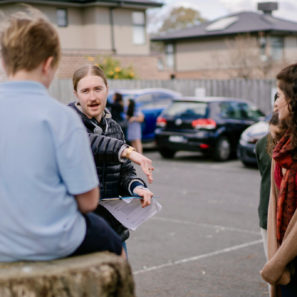 A Melbourne filmmaker who loves to explore distinctly Australian stories that retain fundamentally human concerns. I work primarily as a writer, director and cinematographer.

My work is always conceptual, delving into the hidden corners of the human psyche, traversing the human condition and addressing the themes of time, memory and loss. My recent film, “Hourglass”, has been the recipient of 10 festival selections and won Best International Student Short at the Glendale International Film Festival in 2018.