Winners of the 2015 Australian National Academy of Music (ANAM) Chamber Music Competition, Affinity Collective represents the next generation of Australian music making. In March 2015 their inaugural concert season, Affinity Collective Presents New Music by Jack Symonds, was launched at ANAM’s Ballantyne Room to sold-out audiences. This four-part series presented three World Premières by Symonds alongside relevant European chamber music from the past century.Affinity Collective Quartet has received part funding from the Australia Council for the Arts to research and develop performance opportunities overseas in 2016. The quartet travels to the UK and Germany in March for a six-week study tour of performances and mentorships in Cornwall, London, Berlin and Hannover with Australian composer Brett Dean, British composer Thomas Adès and leading European quartets: Brodsky, Doric, Belcea, Noga and Kuss.

Funds contributed to our project will help towards our IMS course fees, London and Germany mentorships and return travel to and within Europe.

International Musicians Seminar (IMS): March 30 – April 10
Affinity Collective has been accepted into the prestigious IMS masterclasses, directed by Steven Isserlis, in Prussia Cove. We will receive 11 days of intensive tuition in the class of Thomas Adès and perform in public concerts in Cornwall: http://www.i-m-s.org.uk/

London Residency: April 11 – 28
Mentorships with Brodsky, Doric and Belcea Quartets. We will perform six public concerts, including one as part of the Yehudi Menuhin Festival at London’s Southbank Centre.

Berlin Residency: April 28 – May 4
Mentorships with Brett Dean, Kuss and Noga Quartets. We will give two performances: one alongside Brett Dean performing his Epitaphs for String Quintet; and another performing with Noga Quartet.

These residencies will help strengthen Affinity Collective’s creative practice towards us becoming an established Australian ensemble paving the way for new music, collaborations and new ways of musical learning.

Come and hear Affinity Collective Quartet live on March 22 when we perform our Melbourne Farewell Concert at ANAM. 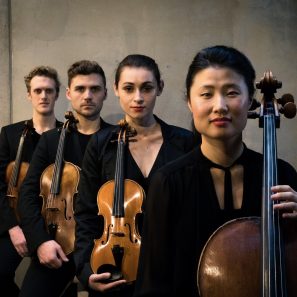 ‘Affinity Collective represents the next generation of Australian classical superstars. Their performances are celebrated not only for phenomenal musicianship, but also for giving audiences an inside experience of classical chamber music.’  Play On Music

Affinity was formed in 2015 and won first prize in the ANAM Chamber Music Competition the same year. They have performed many concerts in Australia and Europe, sharing with audiences an inside experience of chamber music that is accessible and alive. They have been mentored by members of the Doric, Belcea, Brodsky and Kuss Quartets, and by Thomas Adès at the International Musicians Seminar Prussia Cove (UK). Affinity Quartet has given Australian première performances of the complete string quartets of Benjamin Britten, Andrzej Panufnik, Leoš Janácek and Pavel Haas. Affinity has been supported by the Australia Council for the Arts, the Czech Arts Fund, the City of Yarra, and many private donors through Creative Partnerships Australia. Affinity musicians perform with Melbourne Symphony Orchestra, Australian Chamber Orchestra, Australian World Orchestra, and with numerous other ensembles nationally.