APPA needs your help to reach artists and raise funds to deliver the significant prize money being offered in 2020. Donations here are tax deductible.

Many people don’t realise that the Adelaide Park Lands are under threat. They look around and see 700 hectares or so that remain. Adelaide has the world’s first-ever public park (est. 1837) and uniquely designed in a continuous belt. Yet what remains, is crucially important to protect but too few people can visualise the Park Lands that were lost last century, last decade, or even last month.

Once a site is lost, people tend to forget that it was ever part of the Park Lands. And so it goes, year after year, like mice nibbling away at cheese.

APPA is continually obliged to focus on the current battles to protect the next potential loss. But we also need to inspire the current and future generations to value the Park Lands. Focussing attention on the Park Lands through art is a means to that end.

Donations will be used to underwrite prize money to the winning artists and promote the prize to artists, buyers and art lovers across the country. It is intended that the 2020 Art Prize will have prize money at least $38,500, an increase on prizes won in 2018.

If sufficient donations are received, prize money may be extended.

As the Art Prize grows in stature within the arts community, so too, recognition will grow throughout Australia of the totally unique nature of this City In A Park. 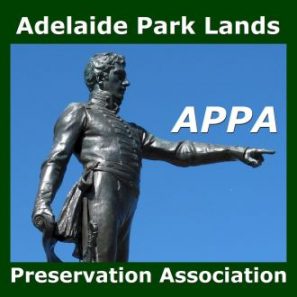 APPA is a community based organisation dedicated to preserving, protecting & restoring Adelaide’s at-risk world-unique garland of Park Lands. The Adelaide Park Lands Art Prize run by APPA (biennial since 2014) has developed a high profile since its inception. The Prize has inspired around 1000 artists from around Australia and several overseas to raise their artistic voice in support for the Park Lands.

Prize money of $38,500 will be offered in 2020. Finalists’ works will again be exhibited at the Adelaide Festival Centre.

Entries to the Art Prize

Artist entries have now closed. Over 360 entries from over 300 unique artists have entered the prize. Visit www.parklandsart.com for updates on finalists and their exhibition opening 1 April 2020.

Our fundraising campaign with ACF has now closed. Although our optimistic target was not reached we are extremely grateful to our generous donors who together raised $8975 in support for artists.

Cinema Reborn 2021 will present a third season of fifteen restored classics sourced from production companies and film archives from around the world.

SALT Festival returns in 2021, a unique platform for artists, creators and visionaries to showcase their work and ideas.