The 70th Australian Intervarsity Choral Festival will gather university choristers from all over Australia in Adelaide in January 2019, to rehearse for a magical concert. Our focus is on modern Nordic composers, and we’re particularly excited about performing the Australian premiere of Kim Arnesen’s Magnificat. We’re all set to perform the work with organ accompaniment, but we’d love to perform it as originally intended – with an orchestra.

Arnesen originally wrote his Magnificat for a string ensemble to accompany the choir, and we’d love to perform it as the composer envisioned it. He writes “Even if the organ version works very well, I still think the original version with strings gives a greater experience.” Unfortunately the registration fees for our festival only cover the basics – sheet music, fees for musical staff, rehearsal camp and social events. This is to ensure as many students as possible can attend, but it does mean that we need support to make an orchestra feasible.

70AIV is a big year for the intervarsity festival movement – an event that looks to the future while staying grounded in a tradition of beautiful music-making. We want our attendees to be surrounded by the best musicians and the best atmosphere that our festival can provide. IVs help students form lifelong friendships, foster a love of music, and are annual events that many students look forward to during their university lives and beyond.

Arts funding is limited at the best of times, and our students are all doing it hard to get to the festival in the first place – airfares, accommodation and sheet music aren’t cheap. That’s why we’d love your contribution towards getting us an orchestra for our concert. There’s nothing like the sound of a full string ensemble with a choir, and in the atmosphere of St Peter’s Cathedral, it will be truly spine-tingling.

As Arnesen writes of his work: “With strings, piano and organ there are more colors to the soundscape… The organ can indeed be a full orchestra by itself, but there is still something about the expressiveness of the strings, the rhythmical function of the piano in combination with a big organ that creates a special overall sound. And together it makes it all sound both intimate, lush and sacred.”

We need at least $5000 to help us pay for our musicians – violinists, violists, cellists, a double bassist, an organist, and a pianist. Supporting our cause would give you the knowledge that you’re supporting the future of the intervarsity movement – a tradition 70 years in the making, a fundamental part of many university students’ lives, and a movement that deserves to be around for a long time to come. 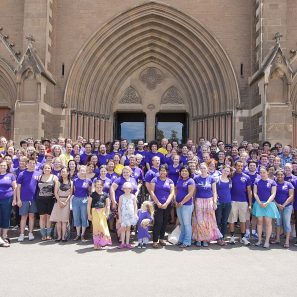 The Australian Intervarsity Choral Societies’ Association (AICSA) and its member choirs have been hosting annual festivals (IVs) since 1950. These attract over a hundred university choristers from across Australia, striving to produce a large concert of a high standard. The IV format is unique, steeped in tradition, and places emphasis on social activities, intensive rehearsals, and a quality performance.

The most recent IV, held in Melbourne in January 2018, concluded with a performance of Elgar’s Light of Life conducted by Patrick Burns in Melbourne Town Hall. The most recent Adelaide IV was held in 2013, co-hosted by the Adelaide and Flinders University Choral Societies, and culminated in a performance of Rachmaninoff’s All-Night Vigil conducted by Christie Anderson in St Peter’s Cathedral.

The IV to be held in 2019 will celebrate two milestones – it will be the 70th festival overall, and the 10th to be held in Adelaide. Our concert ‘Northern Lights’, conducted by Peter Kelsall in St Peter’s Cathedral, will feature modern choral repertoire from renowned Scandinavian and Baltic composers such as Pärt, Ešenvalds, Sandström and Gjeilo, and the Australian première of Kim André Arnesen’s Grammy-nominated Magnificat.