This project is to help and create new knowledge in the art of dancing, as well as expanding on learning about what creativity is and artistic wisdom for the artist and people.

With COVID-19, Adam understands that things have been held back. However, Adam’s commitment is absolutely second to none and he is willing to wait to reach his goal for a dancing course that he would like to do.

Adam has already made massive impressions throughout Melbourne and possibly internationally through his influence and he has made significant contributions, demonstrating how people can become braver in putting themselves out there through self-promotion. People are now braver and are being a much better version of themselves. It is slowly becoming a freer world.

On Bruce Lee’s tomb, it quotes:
“Your inspiration continues to guide us toward our own liberation.”

Art is not only just about creativity, but it can also help others on how they want to approach their own lives.

By helping Adam in becoming a dancing instructor, he will learn more about the art of dancing and can make huge advancements in his studies. Sometimes too, art is not only just about creativity and expression, but it can also help others on how they want to approach their own lives, so he will be making advancements in this part too.

The donations will be used to help Adam become a dancing instructor for next year as well as updating his publications and his health and fitness journey. If you would like to help Adam, he can maintain the above course of action and can change people’s lives, being inspirational and liberating individuals on which they would love to do. 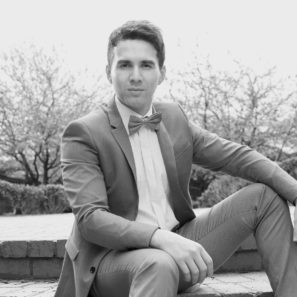 Adam Simpson, a musician, teacher & composer has made a massive impression throughout Melbourne and possibly internationally through his influence, artistic evolution and has established a whole new standard.

A former student from the Sir Zelman Cowen School of Music, Monash University studying piano, his performances include being a 2nd round finalist of the World Competition, improvisation live from an audience’s choice of key and even improvising to Beethoven’s music live!

Being a very passionate composer, Adam just released his own self-released single called ‘Just Move’ with him… singing, which is a fun, dance party song connected to 2 of his current visionary papers.

These are Bruce Lee’s The Art of Expressing the Human Body, not in terms of martial arts but in dancing since Adam is also a very passionate dancer & Perfect Pitch/Sound Recognition in conjunction with Music Composition.

We seek to fundraise the start up costs to establish Grace Dance Company as a Charitable Not For Profit and to provide care for dancers and communities through artistic practice and cultural storytelling.

Mother Tongue is a wholly unique work that weaves traditional dance and live music with emergent technology, posing a vision of the future and who we are as a nation. Our aim is the world premiere in 2021.

We need your help converting an iconic fire station into a state-of-the-art arts facility. Support our local artists and performers by making this a reality! All donations are tax deductible.