A Dog, a Dolphin and a Horse is a film for people who enjoy stories about family and what it is to grow up in a challenging world. It’s about parenting, nature, following your heart and being true to yourself and the ones you love.

At its core, A Dog, a Dolphin and a Horse is about learning to put down roots. Its themes of family and the environment are universal.

A Dog, a Dolphin and a Horse centers on 11-year-old Frankie and her parents who live a gypsy life and travel the world on their yacht, Barracuda. Home-schooled by her mother Camille who has never quite mastered English, Frankie can strip an engine with ease, tell you the myths and legends of every country she’s been to from Fiji to Norway. But she’s not so great on reading and writing. The family arrive at Adelaide’s Port River where Frankie’s father Harry, a master boat builder, has a few months worth of work lined up. When Camille also finds casual work, Frankie is left to her own devices and gets to know the unique characters who etch a living off the river, and the mystical dolphins who live there.

There aren’t many cities in the world lucky enough to have wild dolphins living in them.  Adelaide’s Port River dolphins are precious.  The dolphins are intelligent, graceful, cheeky and protected.  However, not everyone on the river sees them in a good light, some find them a nuisance and a couple of the dolphins have been found slaughtered. This quiet community and its unique way of life is a microcosm of a much bigger world.

The research we have done is considerable, including working with dolphin watch expert Dr Mike Bossley. It is important that A Dog, a Dolphin and a Horse is authentic and true to life on Adelaide’s Port River.

The film will be directed by award-winning Australian filmmaker, Craig Monahan whose projects (‘The Interview,’ ‘Peaches’ and ‘Healing’) are unique and highly regarded and demonstrate the amazing talent we have in this country. Although it would probably be easier for our filmmakers to work overseas, Craig is devoted to making films here in Australia.

We are promoting A Dog, a Dolphin and a Horse through social media, with a view to involving the community in what is, in essence, a community based story. This is the first stage and we need to raise script development funding. (And just in case you are wondering why in the video pitch Frankie is a boy and in the written pitch Frankie is a girl, it’s because after the video was made we changed our minds.)

To find out more please visit our Facebook page or e-mail us dogdolphinhorse@gmail.com. 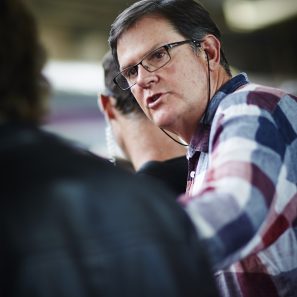 Craig Monahan is a Melbourne-based Filmmaker.

As a credited Director, Producer and Writer, Craig established Pointblank Pictures as his development and production company. A graduate of the AFTRS, Craig has made 4 films – “Animated”, “The Interview”, “Peaches” and “Healing”.

Craig is a multi-award winning filmmaker. His films have received domestic and international acclaim and success, including Best Picture and Best Original Screenplay for “The Interview”, and “Healing” was awarded Best Picture at Cannes Cinephile in 2015.

“My passion is film. My focus is films, set in a social and political context, exploring and reflecting who we are.”