A Disturbed Earth is a documentary about a small Galilean village invaded by Jewish Zionist militias during the olive harvest of 1948. Outnumbered and outgunned, the people were unable to protect their village from invasion. Over seventy men were lined up in front of an ancient limestone wall blindfolded and gunned down, their families as witness. The survivors were forced to seek refuge over the border in Lebanon where many still live today in refugee camps.

A Disturbed Earth reverses the journey back to the village. Fouad now lives in Australia. He is a father, grandfather, poet and survivor of the massacre. Accompanied by his filmmaker daughter and a small crew Fouad travels across three continents through refugee camps and militarised borders. The group attempt to return to the destroyed village to reveal and document its destruction.

A Disturbed Earth brings to life stories of the attack on the village through memories of its survivors. Israeli military archives are explored and surviving traces of indigenous life in the village prior to the invasion are found. With a small investigative team that includes a well-known Israeli historian, the film seeks to reconstruct pieces of a fragmented picture. What follows is a story about dispossession, memory and longing – a story buried under the breathing rubble of a village for almost seventy years.

The refugee existence of Palestinians is the most long-term in the modern world, and a long-term refugee camp contains the despair and hardship of dispossession, but also the brilliance of survival.

Each location of the documentary will become one of its characters. While Fouad returns to the camp he grew up in, the camp itself with its surreal contradictions, architecture, colours, and special sound-scape determine the visual and sonic form of the film. The cracks of tired and weary windows become the fatigued exhale of the camp. The dirt ground transforms a voice speaking in dialect, evoking the image of trembling dust that swirls around the foot of a person lined up against a wall, waiting to be murdered.

The viewer not only learns about life in a refugee camp, but understands the way forced exile creates lives capable of living across multiple times, forced to remember and to dream while awake, both for those who physically left Palestine and the generations of the camps who came after.

A Disturbed Earth will explore this dreamscape using a style informed and inspired by the creative expressions of the people whose story it tells. Exile and struggle often create visual and auditory/sonic brilliance. Poetry, music and other art forms will be woven throughout the film.

Story sharing is an organic continuum of oral history traditions and in this spirit the interviews will not be filmed in traditional talking head set up. The interviews themselves will be a form of poetry, taking us back into the village over steel fortified and locked borders. They will tell of life in the village before the invasion, the wheat harvest celebration and help us get to know certain people murdered in the attack such as Mahmoud Zaghmout, Galilee’s best known singer of the time.

A Disturbed Earth will also seek to make historical archive out of the everyday. Here a village folk song, remains of an oil jar or a wedding scarf hastily packed in the bosom of a woman during the flight from home serve as historical document alongside more official and recognised sources. Archival materials help to gather fragments of the story and give it cinematic form.

As well as the key creatives mentioned above, we have also secured a very dedicated production crew, including musical composer and musicians for original film score. Most of the research has been completed and locations scouted. We also have access to all of the places and people that we will be filming.

How will your donation be used:

We are seeking $25,000 funding to complete the development phase.

We anticipate that the full budget for the film will be $750,000. We are happy to discuss our production pathway with contributors.

All contributions to the ACF over $2 are tax-deductible. 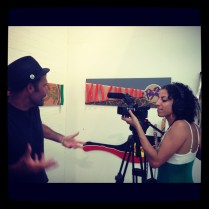 I am a digital storyteller and creative media professional with over fifteen years experience in the media arts. I have worked in a number of media arts professions including foreign correspondent, video journalist and news producer in Sydney for four years and in Damascus for one year. I have written and directed short films on a number of mediums including, 16mm film. As a media artist I strive for always furthering my creative techniques and forms as well as providing a platform for my own and other untold or silenced stories.

Double the value of your donation! Thanks to Creative Partnerships Australia’s MATCH Lab program, every dollar you preference to Rihab will be matched dollar for dollar.