A collaboration between Lizzie O’Keefe and Lindsey Pollak, the project Dangerous Song – Blue evokes an emotional connection and response to climate change. 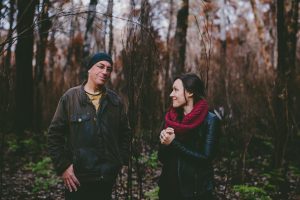 In Dangerous Song – Blue the duo combines the human voice with the sounds of endangered and extinct animals to create an intriguing and moving musical performance. We spoke to Lizzie about how they designed and delivered a successful ACF campaign.

Why did you choose the ACF to raise funds for your project?

My music partner and I previously used the ACF to raise money to develop Dangerous Song – Blue in its initial stages. We didn’t have any merchandise to exchange for reward based donations, so we were recommended to use the ACF fundraising platform.

Being a patron of the arts is unfortunately much a thing of the past, however, the ACF allows people to become just that, through donating to a cause that they believe in, just because. Everyone knows that musicians can be hard up, so by having a fundraising platform that isn’t reward based, enables artists to move forward.

I believe that the arts play a very strong role in our society and can be used as a powerful tool to convey important and meaningful messages, which in turn can evoke change for the greater good. Having platforms like the ACF make this possible.

Because of these reasons, we chose to use the ACF again to raise money to record the ‘Dangerous Song – Blue’ album. The donations we received were very much a ‘hand up’ and not a ‘hand out.’

Tell us about your fundraising strategy. What did you focus on and why?

Our project – ‘Dangerous Song – Blue’ has a very strong and important message. It isn’t about us as artists but about the 6th extinction crisis, which we are currently in. This project pays homage to the ocean, so through our music, we want to spread awareness and help generate a love for this beautiful planet.

Everyone knows that pushing a fundraising campaign can be hard work and sometimes a little bit embarrassing (editor’s note: for help with this, check out our video on how to ask people for money) but because we felt so passionate about the cause, it made it very easy to push (nearly every day).

We used three main platforms to promote our campaign: mailing lists, social media, and live performances and made sure that through our communications we were solely focused on what we were doing it for.

You had a great social media presence throughout your campaign. What marketing tactics did you use for promoting project Dangerous Song — Blue? What worked and what didn’t?

We were very lucky because we developed the live show of ‘Dangerous Song – Blue’ a year ago, which is a 1-hour multimedia performance using the most incredible underwater cinematography, celebrating the beauty of the ocean, that was given to us from David Hannan of Ocean Ark Alliance.

The film is accompanied with a live soundtrack played by Linsey Pollak (who uses only the sounds of endangered animal calls) and myself. Because of this we already had a touring product, heaps of photos, video footage, quotes and statistics from reputable sources, plus we are both very dedicated to the cause. This is what enabled us to have a strong social media presence throughout our campaign.

Facebook and our mailing list were the most successful platforms for us as that is where we have the strongest following. Other than performances we did everything online, as funds were tight.

Your campaign made great use of media to present your project’s importance. Do you think that this lead more people to donate?

Absolutely. People connect to things that evoke emotions and touch the heart. Two of the main things that do this are music and visuals, coupled with the hard facts, it is a powerful way to reach many people, hence why we are using both to spread such an important message, not only online but in our live performances.

Even though the facts are hard, we were more motivated to generate a love for what we have, for in the words of Jacques Cousteau “We protect what we love”.

What tips would you most like to share with other artists fundraising their campaign through the ACF?

Make sure you are prepared prior to commencing your campaign with what you want to achieve so that it is ready to go once you have raised enough money, and if you don’t quite hit the target, show your supporters how you will make the project happen regardless.

This will make them feel that their money will not be wasted but rather get you where you want to be, and potentially further. Make sure you have something that people can connect with, whether that is you as an artist or a cause your art represents. And be 100% authentic.

Considering that you have met all your fundraising aims, what will Dangerous Song —Blue look like in 2018?

We have a big year ahead. Although we have been touring ‘Dangerous Song – Blue’ a little bit this year we expect that to only increase, starting with the Woodford Folk Festival at the end of the year. We are going to use the newly released album to generate more performances and festival appearances.

We want to be increasingly active in educating people on single-use plastic and its effect on our ocean. Hence the release of our album using a 100% calico grocery bag with a download code as an alternative to CDs. Climate change, the current extinction crisis we are facing, the mass coral bleaching we are witnessing etc, all with an intention to unite people and empower them to have a voice and stand for what they believe in.

The Adani Carmichael Coal Mine is a massive threat to the Great Barrier Reef and we hope that Dangerous Song – Blue can get on board with generating awareness around this.