4ZZZ is also one of Creative Partnerships Australia’s Plus1 recipients for 2017/18, which means that every dollar they raise during their campaign will be matched dollar for dollar.

As they approached the last few weeks of their social media marketing- and events-focused campaign, we talked to the 4ZZZ team about how it’s going and what advice they have for arts organisations when it comes to online fundraising. 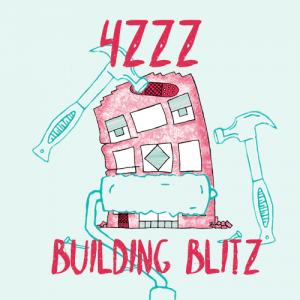 How will the #barrybouncesback campaign leave a positive legacy for your organisation?

Throughout this campaign, we have expanded our organisation’s established fundraising skill set by organising three-months of campaign activities designed to keep the messaging in the public eye. We have run successful fundraising events, collaborated with venues, community partners and private sector businesses thus strengthening existing networks and building new relationships.

The impact the campaign will have outside the actual raising of money will be to restore our station building to its former glory, something that will have an immeasurable impact on staff and volunteer morale.

You received Plus1 funding through Creative Partnerships and then went on to fundraise through the Australian Cultural Fund. Why should artists use the ACF?

The Australian Cultural Fund worked well for us as it provided a landing page that informed potential donors of what the campaign was in detail, displayed our own graphics in an eye-catching way and most importantly tallied total donations for the public to see.

I think the ACF platform’s similarity to other crowdfunding sites meant users felt familiar with it and removed the stress from our organisation of providing constant updates.

You have had a great social presence during your campaign. What marketing tactics have you used for promoting project Barry Bounces Back? What has worked and what hasn’t?

We found early on that donations spiked every time we put the Australian Cultural Fund ‘Building Blitz’ page in front of people’s faces, and the easiest way to do this was through social media.

Using a variety of posts of both our own branded graphics and of the building that is the subject of the campaign helped avoid graphic-fatigue where people scroll past our messaging because they have seen the same graphic several times already.

It also gave people an inside look into exactly what we need the money for and forging this connection with our very passionate listeners and subscriber base was key in encouraging people to donate.

You have produced videos that tell the 4ZZZ fundraising story perfectly. Tell us a bit about how you came up with the idea for these videos.

Our Digital Content Coordinator and online team produced a short infomercial-style video, kind of a send-up of building reality shows like The Block. We knew we wanted to produce some video content for the campaign, and they workshopped the idea from there. And don’t worry, most of the props were flour and cardboard. Our building isn’t that bad…

Tell us about some of the things you’ve done that will contribute to a successful ending of your campaign.

4ZZZ has relied on fundraising to generate a significant portion of revenue for 42 years now, so our listeners know the drill.

For this campaign, we applied our fundraising skills developed over 4 decades to a modern platform and engaged in fundraising activities that are mutually beneficial for the people who have partnered with us along the way.